Super Matty Taylor scored great goals for Pompey during his stay at Fratton Park. Here’s 11 of the beauties

Matty Taylor’s most memorable goal came in a Premier League game against Everton. Kanu competed for the ball (yes, really) in the middle of the park and it dropped on the volley to Matt who promptly sailed it over Tim Howard’s head from 45 yards out. For us, it shades the Sunderland strike (below) because it was at home and a genuine volley.

A carbon copy wonder goal of the Everton strike and made even sweeter by the fact it whistled past former down the road keeper Kelvin Davis. Matty picked up the ball ten yards into the Sunderland half, spotted the hapless keeper off of his line and produced a wonderful, swerving shot from 45 yards out.

Matt added to his collection of worldies with this sweet, instinctive left-foot lob over Jens Lehman and into the top right-hand bin of the Arsenal goal. It doubled our advantage at the Emirates in a game that we were eventually pegged back to draw 2-2.

Pompey shared the spoils away at promotion rivals Leicester courtesy of a tremendous 30-yard curler past the floppy-haired Walker in the Leicester goal. What made the strike even better was that it was with his less-favoured right foot.

Matty’s calmly slotted penalty against Wigan at the DW Stadium sealed Pompey’s great escape that season. A display of bottle made even more impressive as it was the repeat of a trick he had performed the previous fixture against Sunderland. 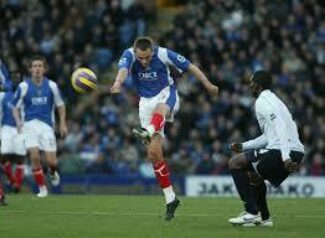 Matty’s goal in this FA Cup tie at Anfield was great but the celebration was even better. After a Smertin cross the ball broke to SMT, who took one touch to control and then with his ‘weaker’ right foot shot powerfully past the stranded Dudek; his goal celebration even better. As he wheeled away and ran the entire length of the pitch to celebrate with the ecstatic away fans.

Pompey completed the double over Forest at the City Ground thanks, in part, to Taylor’s right-foot strike fired into the top corner from 25 yards out an hour into the game. It was a goal made even more memorable due to the fact that I had a tenner on Taylor as first goalscorer.

Matty Taylor's powerful drive sped at a rate of knots past Mark Schwarzer's grasp and into the roof of the Boro net. A Yakubu winner ended Portsmouth's run of six League games without a victory.

Resplendent in the red away kit, Matty’s magnificent curling 25-yard free-kick zipped over the four-man wall and left Brad Friedel with no chance. It was as good as the game good for the Blues as we went home 2-1 losers.

Watford’s Tamas Priskin gave the ball away cheaply and with the defence backing off Taylor bent a sweet strike beyond the flailing Ben Foster. Yet another of those games when it counted for little. I forget the score.

Portsmouth maintained their drive for a UEFA Cup spot with a 2-1 victory over Newcastle 2-1 at Fratton Park. Benjani opened the scoring before Matty doubled the lead with a stunning long-range strike conjured out of nothing, leaving Steve Harper in the Magpie’s goal without a hope.