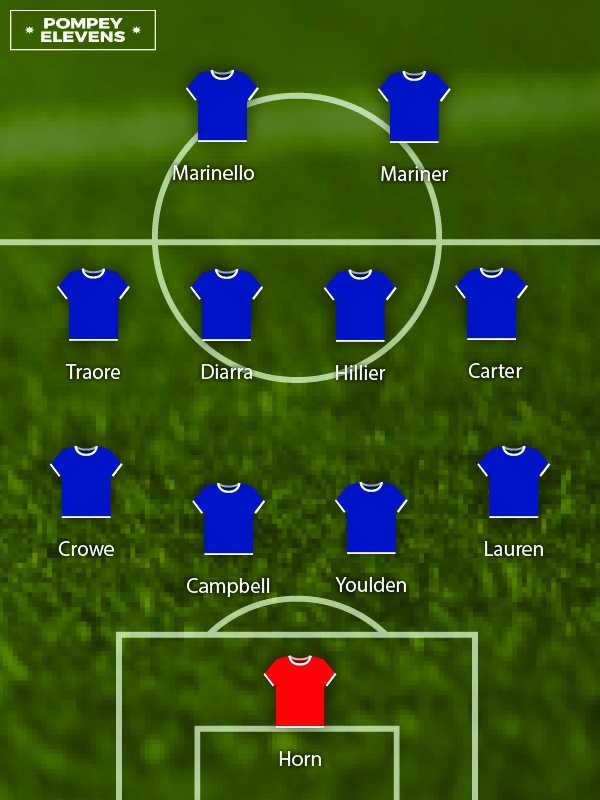 The lanky Londoner was loaned to Pompey as an 18-year-old. Horn was quickly thrown into the action and made 22 appearances during the 1972-73 season. The rug was pulled out from under his successful loan spell when Arsenal sold him on to Luton.

In the shirt of Arsenal, Lauren made 159 appearances, won three FA Cups, two league titles and was a solid performer in the ‘Invincibles’ side. In Pompey blue, the Cameroon international made 25 decidedly average appearances and played in a side that barely won a game.

Sol joined Pompey on a free in 2006, much to the surprise of Arsene Wenger who believed his former charge was looking to play abroad. Campbell stayed for three seasons and added strength to the back line. When he went up to lift the FA Cup in 2008, we were there.

The former Arsenal apprentice never really had a sniff of the first team at Highbury and was snapped up by George Smith and thrown into the centre of Pompey’s defence. He made 90 appearances before moving onto to Reading. After hanging up his boots Youlden declined the mandatory post-football career path as a publican and taught economics instead.

Right-back Crowe made 86 appearances for Pompey and chipped in with five goals after joining from Highbury in 1999 for a not unsizeable £1m. His footballing claim to fame will always be his debut for Arsenal where he managed to get himself sent off after just 33 seconds for a murderous lunge.

Signed on a season-long loan in 2008 the Arsenal speedster formed a pacey pairing with Nadir Belhadj on Pompey’s left flank. One goal and 19 league appearance later and he was back at the Emirates. Traore was once cautioned for bringing a pair of knuckledusters into White Hart Lane when attending the North London derby as a spectator.

Hillier made over a 100 hard-running appearances in the centre of Arsenal’s midfield but he was never going to stay long when a certain Patrick Vieira joined the club in his position. He was shipped out to Fratton for £250,000 in 1996. He stayed for a couple of season before moving on to Bristol Rovers.

Frustrated with a lack of first team opportunities at Arsenal, Lass joined Pompey in January 2008 for a snip at £5.5m. He soon lived up to his tag as the ‘new Makelele’ with some stunning midfield displays. Joined Real Madrid after only 24 appearances, where he soon lived up to the ‘new Richard Hughes’ tag (we made that last bit up).

Not to be confused with the peanut growing POTUS, the former Milwall winger endured tough spells at Liverpool and Arsenal before joining Pompey as Terry Fenwick’s first signing in 1995. He made 72 appearances for the Blues, but was only able to reveal fleeting glimpses of his match-winning potential. His nickname at the club was ‘Bhuna’, reportedly due to his love of a good curry.

Arsenal paid a club record fee to sign ‘the next George Best’ from Hibs in 1970, but the pretty boy Scot failed to live up to the hype. He was eventually shipped out to the south coast, but, once again, failed to live up to his £100,000 price tag. A precocious talent squandered.

The former England and Tractor Boy target man had reached veteran status by the time he arrived at Fratton Park in 1986. Yet that didn’t stop the ancient Mariner putting in a proper shift during his two season stay, forming a solid partnership with Mick Quinn during Pompey’s 1986-87 promotion season.